Egeda US is proud to support AFI FEST 2018 as Official Community Partner! Dont miss these movies! (You will find the link to get the tickets below)

Synopsis:
In a transitional moment personally and professionally, Juliana knows all too well the value of having a steady gig as a member of Brazil’s working class. After relocating to bustling Contagem to take a municipal job with the endemics department, she and a colorful crew canvas the city’s favelas, eradicating mosquito nests while she awaits the arrival of her husband, whose constant and evolving excuses spell trouble. Yet as Juliana settles in and her new life as a single woman comes into focus, she learns to face her troubled past and to savor those rare, precious little bits of joy  a night spent with a new lover, a welcoming slice of cake from a lonely pensioner  in this rich and absorbing feature from writer/director André Novais Oliveira.  Cedar Sherbert

Synopsis:
Laura (Penélope Cruz) has returned to Spain for her sister's wedding. The mood in her bucolic hometown is festive, and many faces from the past are present for the nuptials, including Paco (Javier Bardem), a longtime friend of the family. But when Laura's daughter goes missing late into the night of the celebration, and text messages arrive asking for ransom, the happy reunion takes a hard left turn into nightmarish territory. With EVERYBODY KNOWS, Iranian auteur Asghar Farhadi skillfully directs his most overtly suspenseful piece to date, keeping the screws turning while sacrificing none of the layered drama surrounding family and class for which he is known. Cruz and Bardem both turn in shattering performances, as Laura and Paco's complex history slowly emerges in the midst of crisis.  Beth Hanna 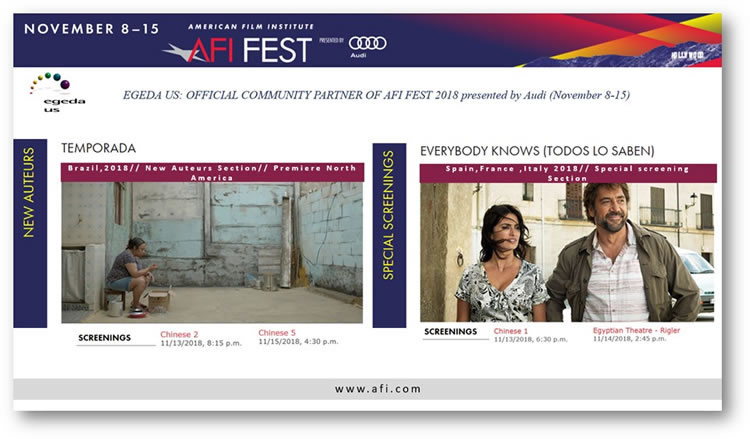