Director Alex de la Iglesia will attend the 4:30 PM screening of new release My Big Night at the Laemmle Music Hall in Beverly Hills on Saturday 4/16 and participate in a Q&A with the audience afterwards. Website http://www.laemmle.com/films/40611 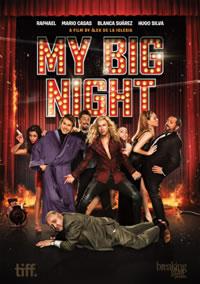 It's only October, but the network's annual black-tie New Year's Eve spectacular has already been in production for a grueling week and a half, and setbacks continue to accumulate. A falling crane has just taken out an extra, and the show's hosts are at each other's throats. Over-sexed pop sensation Adán (Mario Casas) discovers two women have stolen his semen, while legendary divo Alphonso (Raphael) is stalked by an armed and unstable would-be songwriter (Jaime Ordóñez). Meanwhile, just outside the studio, riot police move in as demonstrators demand the arrest of the shows corrupt producer (Santiago Segura).


Alex de la Iglesia will attend the 7:30 PM screening of "A Perfect Crime" at Laemmle Fine Arts in Beverly Hills on Wednesday 4/13 and participate in a Q&A with the audience afterwards. Website http://www.laemmle.com/films/1604 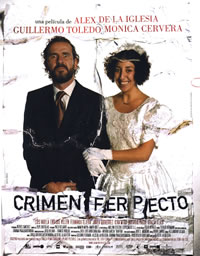 Alex de la Iglesia (THE DAY OF THE BEAST, PERDITO DURANGO, LA COMMUNIDAD) returns with a new black comedy. Guillermo Toledo (THE OTHER SIDE OF THE BED) stars as the Don Juan of a big Madrid department store -- an ambitious ladies department clerk who longs to become FLOOR MANAGER The sexy salesgirls take turns spending the evening with Rafael in the department store after hours. He wines and dines them in fancy clothes borrowed from the racks followed by wild sex in the beds in the furniture department. Rafael will do anything to ace out the competition for the Floor Manager positon. His chief rival? Don Antonio (Luis Varela), manager of the Men's Department. The two face off, their total sales will determine who gets the promotion.