About the story and synopsis

The short film THAT WASN'T ME (Aquel no era yo), written and directed by spanish director Esteban Crespo, tells the story of PAULA and KANEY. Two characters, a Spanish woman and an African child, who should have nothing in common, but whose lives are forever to be joined through a life-giving shot. 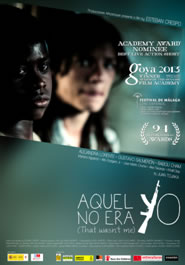 KANEY is an African child soldier. He lives with many child soldiers and obeys the orders given by the man who has become their father figure, the GENERAL of the Rebel Army (Babou Cham). PAULA (Alejandra Lorente) is a Spanish aid worker who moved to Africa following her boyfriend, JUANJO (Gustavo Salmerón), in order to bring help and to rescue the child soldiers who live there. In a border crossing point, PAULA and KANEY meet each other and this will be the starting point of this dramatic story, full of fear, violence and redemption.

Shortfilm THAT WASN'T ME (Aquel no era yo) was conceived to respond to the wish of showing the harshness of the child soldiers' lives and something that we rarely see: its consequences. On the other hand, THAT WASN'T ME responds to the wish of paying a tribute to the altruistic labor of those people who put their lives into danger every day in order to save other people's lives. As an ex child soldier of the sierra Leone armed conflict said: "Being a soldier is not that difficult: either you get used to it or they kill you. The
most difficult thing is to get used to living with your own memories and to being yourself again after doing the things you have done".

Esteban Crespo is a screenwriter and director. He started his career with documentaries, carrying out several pieces for the Spanish television. Later, he became content advisor and analyst of children programs for TVE (Spanish Television).

He combined these works with the direction of the short films "Siempre quise trabajar en una fábrica", "Amar", "Fin", "Lala", which was nominated as Best Live Action short Film at the Goya Awards in 2010, and "Nadie tiene la culpa" ("It's nobody's fault"), which received the Jury Award at the 2011 Montreal International Film Festival among others.

His latest short film "Aquel no era yo" was awarded the Goya to the Best Live Action short film by the Spanish Film Academy in 2013 and it has received over 90 national and international awards so far. More than 200 National and International Awards back up these works. At present, he directs advertising ads and he is working on his first feature film.

For more information do not hesitate to contact us by email to egeda-usa@egeda.com or by phone to our offices in Los Angeles 310 246 0531.