Lead actress Carmen Sanchez has been selected as Best Actress at the Feel Good Film Festival. 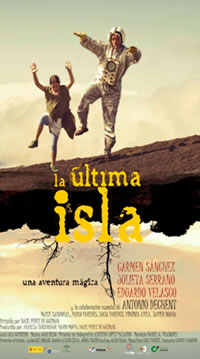 The Last Island" is a magical tale which tells the adventure of a 10 years old girl, Alicia, which is send by her parents to a remote island during the summer in the care of an aunt which she does not even know.

In a place where conventional wisdom does not work and where anything can happen naturally, Alicia knows her aunt, a healer who she sees at first as a dangerous witch.

A protective amulet, a black lava island, a dark forest where Alice is lost, a dragon of mist and a cliff where her fate is decided, are the elements of this unique adventure. This is a story where children behave like adults and adults like children.

Leading actress Carmen Sanchez and producer/director Dacil Pérez de Guzman will be in attendance at the Festival.

Carmen is a very experienced and well-known young actress in Spain. Her next role will be in the TV series that will be released in September, "El Don de Alba", a Spanish adaptation of CBS "Ghost Whisperer".