SPECIAL FREE SCREENING OF EXTRATERRESTRIAL ON JUNE 19th 2012
organized by Tugg at the Laemmle North Hollywood.

The movie will be released in Los Angeles on June 22, and Tugg has organized this special screening followed by Q&A with the director before the movie is released.

RSVP to rsvp@tugginc.com and indicate that you got this invite from EGEDA.

Screening is free but it is "first come first served". RSVP is required and dont be late 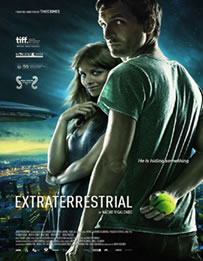 Synopsis:
Extraterrestrial, is a romantic comedy told in the midst of an alien invasion in Spain.
Vigalondos sophomore film tells the story of Julio (Julian Villagran), who awakens one morning to find himself in the apartment of the beyond beautiful Julia.

Extraterrestrial offers a unique twist on a familiar genre as a couple uses the invasion to cover up their one night stand. Simply put, the film is a sweet little story with a bit of dark comedy mixed in.

Written and Directed by Nacho Vigalondo.

The film is entirely in Spanish, with English subtitles. For a trailer and more info about the film, you can click here You can also read a review of the film here.

There will be a RSVP list at "will call" and you will get your ticket once you check in.

Q&A following the film with the director Nacho Vigalondo.

For more information about Tugg, visit www.tugg.com and learn how you can bring your favorite movies to a theater near you!