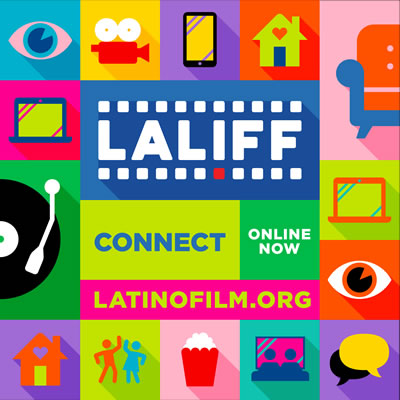 LOS ANGELES, CA April 14, 2020  Academy Award®-nominated actor Edward James Olmos, founder of the Latino Film Institute, announced that the Los Angeles Latino International Film Festival (LALIFF) will host a virtual retrospective program of its 2019 edition from April 14 to May 4, 2020 in anticipation of its 2020 virtual edition, LALIFF Connect, held from May 5  31st.  LALIFF Connect 2020 and 2019 Retrospective will include feature films, short films, episodics, masterclasses and musical performances  all will be available through LALIFF's website for free with additional titles to be announced.

"We are living in unprecedented times and we must find unprecedented solutions to continue to support our Latino filmmakers and provide them with a platform to showcase their work," says Edward James Olmos, founder of LALIFF. "Working together with our filmmakers, musicians, partners and sponsors we will be able to celebrate our festival virtually to continue to showcase some of the most inspiring and thought-provoking Latino films of 2020 and share with cinephiles everywhere, from the safety of their homes."

The program will include the feature film The Last Rafter from award-winning directing duo Carlos Rafael Betancourt and Oscar Ernesto Ortega. The critically acclaimed film follows the journey of a Cuban man who risks his life in the Florida Straits on a raft to search for his long-absent father in Miami, but a political shift makes him America's first undocumented Cuban immigrant. Now he must battle the new and bigger fear of deportation, while trying to find where he really belongs.

Paper Children directed by Alexandra Codina will also be part of the festival with a special virtual event followed by a Q&A session on Tuesday, May 12. The film, available on YouTube this summer, explores America's invisible refugee crisis through the eyes of one Miami family who navigate a broken system with unwavering resilience.

The Chilean film This Is Cristina, directed by Gonzalo Maza, distributed by Figa Films and executive produced by Salma Hayek, will also be part of the Festival's Official Selection. The film tells the story of Cristina and Susana, who have been best friends since high school but now, when they are already over 30 years-old, are receiving a wake-up call.

"LALIFF Connect is our new online initiative to address the world's current reality. LALIFF Connect is completely free to the public in order to support our community during the stay-at-home emergency order," says Executive Director of LALIFF, Rafael Agustín.

LALIFF Connect 2020 will also present a series of masterclasses including Nightlife Curation in the LatinX World with Cumbiaton's DJ Sizzle of Cumbiatón and Funky Caramelo; LatinX in Animation: A Masterclasswith Head of Story of Connected at Sony Pictures Animation Guillermo Martinez, Co-Producer at Walt Disney Animation Studios Yvett Merino, and Creative Producer of The Casagrandes at Nickelodeon Animations Studio Miguel Puga; Music Composition: Masterclass with composer Elik Álvarez, composer Tony Morales and composers/producers Carl Thiel and Maria Vertiz; and a Sound Design Masterclass with the Sound Designer of the film The Last Rafter, Paola Magrans.

"We are proud to advocate for Latinx artists and musicians, especially at a time where they have been hit the most and share their beautiful sounds. Be sure to dance in your living rooms and don't worry about the door feeLALIFF has you covered," says Managing Director of LALIFF, Alexis de la Rocha.

The 2019 retrospective, which starts today, will include three features, nine shorts and three episodics as well as musical performances. The features will include Councilwoman directed by Margo Guernsey and I'll See You Around directed by Daniel Fermin Pfeffer which will be available online during the entire month of the retrospective (April 14th  May 4th). The program will also host a special virtual event of the film Divine Love directed by Gabriel Mascaro followed by a special presentation with music from DJ José Galvan on April 29th.

The LALIFF 2019 Retrospective, that brings some of the best acts of last year's edition including 'La Mera' Candelaria, DJ José Galván, DJ Vick Jagger and Linda Nuves of Chulita Vinyl Club who will join us again to perform on the following dates:

Additionally, the Youth Cinema Project (YCP)another initiative of the Latino Film Institutein an effort to help its teachers and students while schools remain closed, has also started a program called YCPLiveReads. YCP will host live script readings of its students by talent from TV series and films including Gentefied, Vida, Devious Maids, Napoleon Dynamite, among others every Wednesday and Friday at 1pm PDT throughout the month of April. This week's YCPLiveReads will include participation from the cast of Spanish Aquí Presents and Devious Maids. People can join the live reads by visiting YCP website or by searching the hashtag #YCPLiveReads on social media.

The Los Angeles Latino International Film Festival (LALIFF) is a premiere international event dedicated to showcasing the entirety of human experience from the Latino perspective, whether through film, television, digital, music, art, or any other vehicle, regardless of platform. LALIFF is presented by the Latino Film Institute (LFI), a nonprofit 501(c)(3) organization with the mission to showcase, strengthen, and celebrate the richness of Latino lives through the audio-visual event. LFI develops, activates, and supports artists, creators, and executives through pathways and platforms for the expression and appreciation of their work.

For more information and updates on LALIFF visit www.latinofilm.org.

For more information on the Youth Cinema Project visit www.youthcinemaproject.org.