Egeda US is extremely proud to present both titles!

The WORLD PREMIERE of Salvador Simo's BUNUEL IN THE LABYRINTH OF THE TURTLES.  Set in 1930s Paris, the film combines gorgeous animation with actual footage from the Surrealist master to tell the story of young Luis Bunuel and the making of his next film.  The film will screen only one time, on Saturday October 20 at 6:45PM at the TCL Chinese Theatres in Hollywood.  Director Salvador Simo will be in-attendance as well as Rafael Bunuel, Luis Bunuel's son!  Use the promo code BUNUEL for 40% off tickets at: https://animationisfilm.com/film/bunuel-and-the-labyrinth-of-the-turtles/

Goya Award-winner Raul de la Fuente's new film, ANOTHER DAY OF LIFE, will have its US Premiere at the Animation Is Film Festival in Hollywood on Oct 20.  A dazzling amalgam of animation and live-action documentary, Another Day of Life is based on the experiences of Polish journalist Ryszard Kapuscinski in 1975 Angola.  Critically acclaimed at Cannes and winner of the Audience Prize at San Sebastian, this is an essential contribution to this year's animation and Spanish cinema landscape!vThe film will screen only one time on Saturday October 20 at 9:30pm at the TCL Chinese Theatres in Hollywood!

Use the promo code AIF2018 for 40% off tickets at: https://animationisfilm.com/film/another-day-of-life/ 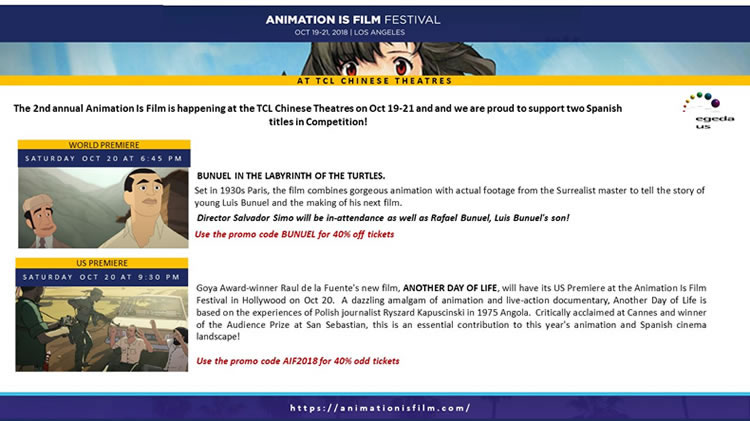