News About Spanish Movies in the U.S. by EGEDA US 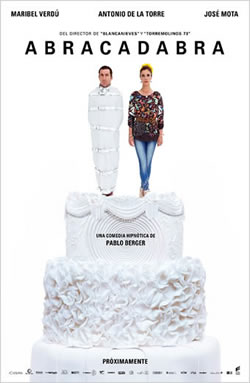 Carmen (Maribel Verdú) lives on the outskirts of Madrid with her husband Carlos (Antonio de la Torre). She's an ordinary housewife who's devoted to her family and he's a construction worker and soccer fan who lives and breathes for Real Madrid. One day their routine lives change forever. At a wedding reception, Carmen’s cousin Pepe (José Mota), an amateur hypnotist, gives a demonstration. He asks for a volunteer from the audience and a skeptical Carlos agrees. The next morning Carlos starts behaving strangely - something went wrong and now he's possessed by a spirit. Together the cousins begin a surreal, comical investigation to bring him back, while  Carmen starts to feel curiously attracted to her “new” husband.

The 2020 Recent Spanish Cinema Series will take place Oct 22nd through Oct 29th and will screen contemporary Spanish Movies for California & Florida audiences. The series will take place both virtually and physically with opening and closing nights at the Drive-In in Los Angeles and Miami respectively