James Costos, the U.S. Ambassador to Spain, pays a visit to the EGEDA offices in Los Angeles 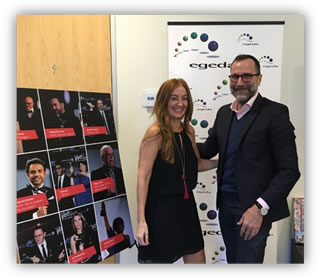 The current U.S. Ambassador to Spain, James Costos, paid a visit to the EGEDA offices in Los Angeles and displayed a great interest in the Associations activities which have been developed in order to promote and spread awareness about Spanish and Ibero-American Film. He was particularly interested in the Premios Platino for Ibero-American Cinema, expressing his intention to attend the third edition of this festival which will take place this year.

Former vice president of well-renowned TV channel HBO, Ambassador Costos is a strong advocate for culture and intellectual property rights protection, which is made evident by his public speeches. He firmly believes that the lack of intellectual property rights protection as well as piracy cripple cultural industries and their content creators, weakening the economic sector which should be primary in any country.

Given his extensive professional background, he is a real expert in the audiovisual sector although he is also interested in culture as a whole. For example, he coordinates the Arte en las Embajadas (Art in the Embassies) Project in Spain, which displays the works of U.S. artists transferred from galleries, museums, artists and public and private collections, alongside works of Spanish and international artists at the U.S. Embassy.

At the EGEDA offices in Los Angeles, he was welcomed by Elvi Cano, the director of EGEDA U.S., who told him about the Ibero-American Platino Film Awards in great detail, as well as informing him about the Spanish film screenings which EGEDA organizes every year in Los Angeles and Miami.

Moreover, she thanked the Ambassador on behalf of the Association for taking a firm stance and standing up for culture and the audiovisual sector.

About EGEDA: EGEDA (Spanish acronym for the "Audio-visual Producers Rights Management Association) is a non-profit association and collecting society, which manages the rights of the producers, collecting on their behalf the royalties that cannot be collected on an individual basis. In addition, EGEDA provides services to producers and the audio-visual industry as a whole. The Association represents and defends the interests of Spanish and Latin American audio-visual producers and is very active in the field of intellectual property rights management. EGEDA US is the US based association of IBEROAMERICAN producers. Recent Cinema from Spain is the result of an initiative by EGEDA US, with the purpose of promoting Spanish films in the United States and encouraging their circulation to the public at-large and the audio-visual industry.

EGEDA US was set up in Los Angeles in 2007 with the aim of having a permanent office in the US in order to serve as a liaison and to facilitate relations between the US film industry and those of Spain and Latin America. This year EGEDA US coproduces together with ICAA and The American Cinematheque the 22nd edition of RECENT SPANISH CINEMA in Los Angeles.