THE SPANISH FESTIVAL ANIMAYO RETURNS TO BE SCREENED IN LOS ANGELES (CALIFORNIA), FOR ITS FIFTH CONSECUTIVE YEAR, TAKING PLACE AT THE LOS ANGELES FILM SCHOOL 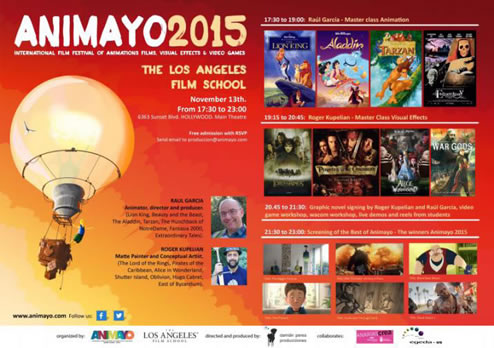 The best of Animayo will be screened in Los Angeles on November 13rd through an event organized in one of the most important school of the worl, The Los Angeles Film School.

This european event born in Gran Canaria (Spain), with a decade of international expansion, has positioned itself as one of the major events for creativity, talent and professional development within the industry of animation, visual effects and video games.
The International Film Festival of Animation, Visual Effects and Video Games Animayo, remains active in the audiovisual sector wherever it goes, and this year repeats experience in the city of Los Angeles - California, where it will screen for its fifth consecutive year a unique program called The best of ANIMAYO, with the winners of 2015. With this event, the Festival settles and strengthened its bases in Los Angeles, returning to be present at some of most important screening rooms of the industry.

With events in countries such Spain, US, Uruguay, Italia, the Netherlands and Portugal, the Festival receives each year more than 1500 works to the competition which 100 of them will be pre-selected and screened to the public during the Festival and all its itinerants.

During the event, Animayo cites again year after year the vips og animation of the film mecca. The call for Animayo LA in Los Angeles results in the presence of very prominent personalities. In total, is predicter to gather approximately 600 people between the two events where will be present dilm directors, producers, distributors, artists, students and hobbyists of the industry.

ANIMAYO at the Los Angeles Film School will have two prominent stars of animation and visual effects industry:

Raúl García, director and producer, working first Spanish animator at Disney Animation Studios, who has worked on titles such as The Lion King, Beauty and the Beast, Aladdin, Tarzan, The Hunchback of Notredame Fantasia 2000, Extraordinary Tales.

Roger Kupelian, matte painter and concept artist who has worked on such titles as: The trilogy Lord of the Rings, Pirates of the Caribbean, Alice in Wonderland, Shutter Island, Oblivion, The Invention of Hugo, East of Byzantium.

Free admission with RSVP sending an email to produccion@animayo.com