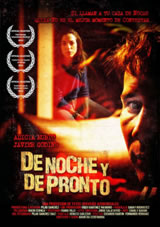 Home alone during the Christmas season, Maria (Alicia Rubio) is startled by a desperate man (Javier Godino) claiming to be her upstairs neighbor, who says  his apartment has been broken into by thieves.

Spanish filmmaker Arantxa Echevarria will appear in person for a screening of her short.


More info on the shorts and the lineup of events at: http://www.americancinemathequecalendar.com/content/etheria-film-night-shorts-competition-0

Evening concludes with an awards presentation.