SPANISH MOVIES IN USA  THE RUNNER 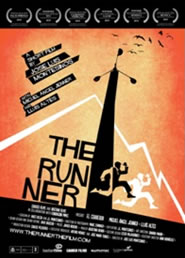 The short film The Runner, directed by Jose Luis Montesinos and produced by Bastian Films, Caduco Films and José María Torres, will have its American premiere at the Palm Springs International Film Festival of Short Films in California.

The Runner is a fable of the workforce in times of crisis starring international actors Miguel Angel Jenner and Lluís Altés. The Runner premiered at the Valladolid International Film Festival (SEMINCI), winning the award for Best European Short Film. The award-winning short is also currently nominated for the EUROPEAN FILM AWARDS 2015 Best Short Film.

It has recently been awarded with the Gaudí Prize by the Aacdemy of Cinema of Catalunya and preselected for the Goya Awards of the Spanish Film Academy.