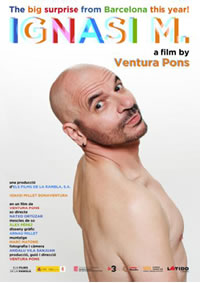 Flamboyant and unapologetically gay, HIV-positive, Ignasi Millet has led a colorful life, and hasn't allowed his sexual orientation to deny him a family, hence his marriage to a woman, with whom he's had two sons and is now openly a lesbian. This documentary portrays Ignasi's joie de vivre as well as the difficult times he faces: his company goes bankrupt, and he is on the brink of losing his house. Also, his regime of 29 pills per day, and his weekly visits to the clinic where he is part of a trial of a new retroviral medication are reminders that AIDS is far from being cured.

After a decade as a theater director, Ventura Pons directed his first film in 1977, Ocaña, retrat intermitent, which was officially selected by the 1978 Cannes Film Festival. With 25 feature films, 23 produced by his own company, Els Films de la Rambla, he has become one of Catalans best-known film directors.