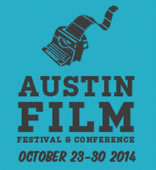 Known as The Writers Festival since its inception 21 years ago, Austin Film Festival celebrates films built on strong storytelling.  AFF recognizes the importance of the creator at the core of filmmaking and screens the highest caliber narrative, documentary and animated films  all of which demonstrate the power of a well-told story. Each year we honor the winners of our competition alongside legends of the industry, who have included Jonathan Demme, Harold Ramis, Vince Gilligan, Susan Sarandon, Ron Howard, and Judd Apatow.

Additionally, the jury awards winners of our Narrative, Documentary and Animated Short categories qualify for an Academy Award. Entries in the Film Competition must either be in English or have English subtitles.  The Regular Deadline for the film competition is June 16th and the Late Deadline is July 15th.


More information can be found at
http://www.austinfilmfestival.com/submit/film/

Do not hesitate to contact us by email to egeda-usa@egeda.com or by phone to our offices in Los Angeles 310 246 0531.