When it appears as though the end is in sight, the pilots, flight crew, and passengers of a plane heading to Mexico City look to forget the anguish of the moment and face the greatest danger, which we carry within ourselves.

Spanish shortfilms at the second edition of The Evolution International Film Festival.
For more information go to http://www.evolutionfilmfestival.com/ 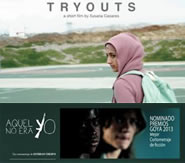 Tryouts
After being rejected from cheerleading tryouts because of her headscarf, Nayla, a teenage Muslim American girl, will have to find her own way to follow her dream without compromising her beliefs.

Thas Wasn't me
"Being a soldier is not difficult: either you get used to it or they kill you. The hardest thing is getting used to living with your memories and being yourself again after doing what you have done".