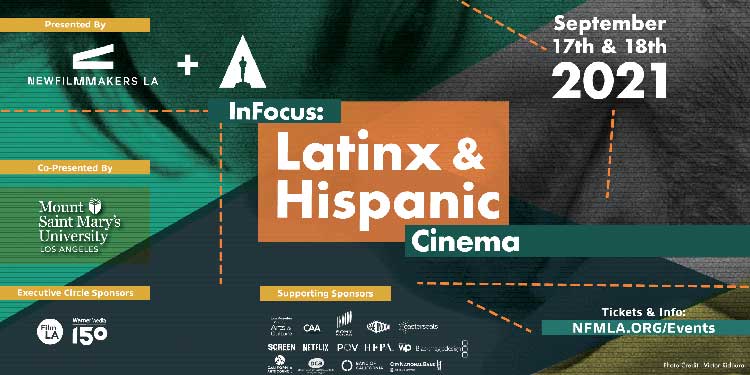 You are invited to join NewFilmmakers Los Angeles (NFMLA) and the Academy of Motion Picture Arts and Sciences (AMPAS) for a virtual edition of the annual InFocus: Latinx & Hispanic Cinema Festival on September 17th - 18th. The program line up consists of three short film programs and a presentation of the feature documentary A La Calle, which was recently acquired by WarnerMedia 150 and will release on HBO Max in September 2021. The Festival is co-presented by Mount Saint Mary’s University Film, Television & Photography program and includes screenings, filmmaker Q&A sessions and industry panels.

The program offers the unique opportunity to experience exceptional independent films by emerging talent, with filmmakers and stories from the United States, Mexico, Brazil, Puerto Rico, Argentina, El Salvador, Colombia, Peru, Venezuela, the Dominican Republic, Spain and the Cuban diaspora. The festival will kick off with four panels beginning in the afternoon on Friday, September 17th, including conversations with Gloria Calderón Kellett, showrunner of the sitcom One Day at a Time, as well as Cristina Garza, Senior Vice President of Development and Production at Endeavor Content.

Saturday’s film programming kicks off with Shorts Program I - A Day at Work, a selection of films that explore work and labor in a meaningful way, as a source of identity, survival, pride and mastery. Following is Shorts Program II - Generational Echoes, a collection of stories centering the relationships between generations and the effects that they have on one another on both a personal and societal level.

The evening concludes with Shorts Program III - In Search of Self and Place, a compilation of narratives that revolve around the pursuit of a sense of personal strength, both through internally finding and asserting oneself and through determining one's place in relationship with others.

The full festival schedule will be as follows: